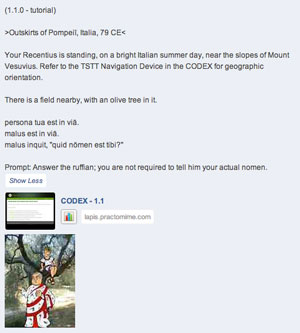 Much of the action takes place in the “TSTT-interface”–a sophisticated simulation cleverly disguised within a secure collaborative platform. Each night, the students receive, in a stream post that pretends to be a “TSTT immersion session,” a new piece of the narrative and a prompt to which their team’s Roman must respond. Their task is to read through the narrative (which includes both Latin and English), to do relevant background research (via information in what we call the CULTURALIA section of a CODEX that looks very much like the codex in your standard issue RPG), and then to collaborate with their teammates to decide what actions their character will take inside of the immersion space.

The students learn to read, write, speak, think, and act like some facsimile of a young Roman by collaboratively performing as a young Roman in a variety of situated environments as a part of a sweeping narrative that spans 171 unique episodes.

We are pleased to partner with Edmodo as the officially supported platform for student collaboration and response. Edmodo, founded in 2008, provides a safe and easy way for your classes to connect and collaborate. Its intuitive interface, which takes a page from top social media sites, allows for quick adoption among students.

We also support Google Drive as the chosen platform to house additional collaborative documents, such as the operative dossier and character sheets. Furthermore, utilizing Google's customizable maps interface, the NAV section of the CODEX contains an interactive collection of resources as the learners progress through the narrative experience. 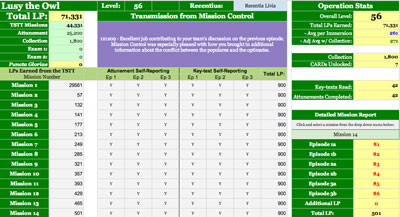 In discussing their response, each team member must carefully cite the source of their information, consider the specific and unique world-view of the team’s Roman, and try as hard as he or she can to include as much Latin in the team’s response as possible. By doing all those things, the student earns Latinity Points (the equivalent of experience points in an RPG) which serve as a indicator of their attunement level within the course and as a way to graph their progress on to the traditional A, B, C, D, and F scale. In traditional graded assessments, students start at full credit and lose points as they get items wrong; Latinity Points work in the opposite direction. As in most RPGs, the better a student does a particular task, the more LPs he or she receives. This subtle twist results in a remarkably different outlook on how to achieve progress throughout the course and, in the end, shifts the focus from the result (a grade) to the collaborative process. Operation LAPIS provides an easy to use rubric for both the instructor and the learner to consult.

The learner's progress is tracked in a comprehensive document known as the operative dossier. Beyond a simple gradesheet, the dossier provides a nuanced analysis of the learner's experience, houses their CARD collection, and contains their Carta Collectionis.

In addition to the immersive story and cultural underpinnings, Operation LAPIS also includes all of the aspects of a traditional introductory Latin course. The CODEX for each episode also contains a GRAMMATICA section for explaining the new concepts as they are introduced in the immersions, VERBA for glosses of unfamiliar vocabulary in the immersions, KEY-TEXTs for additional reading practice, and ATTUNEMENT exercises to further hone their Latin skills. Rather than be the instructional source that dictates the learning, the CODEX flips the role of the textbook and it instead becomes the source for the learner to consult as needed in order to better perform in the narrative experience.

We’ve devised a mechanic that draws heavily upon the grind in video games — namely the need to put in the time and effort in order to gain abilities, gear, or knowledge that will help achieve victory conditions at a later point. This mechanic is called the Carta Collectonis (Collection Sheet), and by virtue of it, students collect words from the texts they see, according to the rules of the Latin language. Operatives can ‘claim’ any word that they encounter and put it in the appropriate list in their operative dossier. The students are building recognition of case and verb endings, self-generating valuable vocabulary lists, and doing this in the context of the immersion.

So now the question remains: where’s the incentive to take part in this grind? For a lot of students, who have taken Latin courses over the years, the incentive to build out lists that may look similar to the one referenced above was to get better grades on a quiz or a test. Build a vocabulary list, memorize the words on the list, regurgitate the words on a vocabulary quiz and bounce off happily with the A. However, as anyone in education will attest, ‘learning’ something for the sake of a quiz or a test isn’t actually learning. At best, the result is that the information gets stored in the short-term memory banks and dissipates rather quickly. 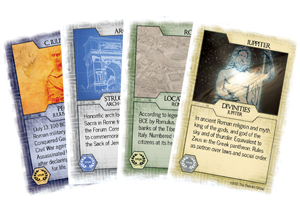 With the Carta Collectonis we've managed to create something entirely different. We've devised a reward system known as CARDs: Classical Attunement Reward Devices. These CARDs have Latinity Point values assigned to them. In addition, the CARDs are stored as a part of the student's dossier and become the driving mechanism through which the students participate in the in-class tournament version of CARD-tamen™.

Each CARD that the student unlocks through the carta collectionis allows them to use that CARD in the class tournaments to unlock the limited special editions of those CARDs.

Ultimately, through this ownership of the narrative progression, students engage in a more personal experience with their learning. Operation LAPIS, that is, in addition to being engaging in in its use of a narrative, is also radically student-centered in its game-based structure. The students, as operatives, are in control of the actions that their characters take within the story and, as a result, they become far more invested in the content of the course, because extensive knowledge of the content will allow them more freedom and flexibility within the immersion prompts. Since they are working as static teams, there’s healthy competition between the characters both in the immersions and in the physical classroom space. Also, as a result of this desire to have the characters perform better, there’s a heightened sense of community within the teams in order to ensure that all members can aid in contributions. 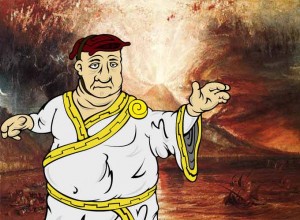 Operation LAPIS is available to instructors in traditional classroom settings and to those looking for a fully managed homeschool experience. If you are interested in learning more about the possibilities of utilizing our practomimetic courses in your classroom (including a free full featured demo available now), please explore the Key Classroom Facts at a Glance page, or contact Kevin Ballestrini (kevin@practomime.com).

If you are interested in our homeschool and lifelong-learner program, please see our Online LAPIS page, and contact Roger Travis (roger@practomime.com).